Imagine heavy duty sand paper being dragged over your skin, that is how rough a cheetah’s tongue is. The feeling itself is such an unusual sensation, as is the actual experience of allowing the fastest moving land animal to playfully nuzzle up to you. Indie is the wildlife sanctuary’s friendliest one year old cheetah, she’s a very loveable creature even when she is really tugging and

testing out her playmate.

I was however always very aware that this is a deadly predator and very glad that I was in the capable hands of Ali, one of the sanctuary’s hard working troops. She is certainly trained to deal with cheetahs as she has three living in her back yard!

Every volunteer is given a huge amount of time to spend with the sanctuary’s many animals so you soon learn their various quirks. Chuck and Larry, the sanctuary’s two squirrel monkeys love cameras, and insist on seeing every photo taken of them. Luckily they seem pretty pleased with each photo: in their eyes they are photogenic from every angle. Fugly is the sanctuary’s most aggressive marmoset. With one ball and a haggled tooth this aptly named creature is an animal most volunteers try to avoid contact with.

The parrots are hilarious, there’s a group right next to the dining hall and you are often greeted or sworn at in several languages or given a variety of ring tones. If you are very lucky you can be treated to a rendition of ‘Hitler has only got one ball…the other is in the Albert Hall….’ One of the volunteers even trained a certain moody parrot, comically named Prosac, to occaisonally burst out with ‘Help! They’ve turned me into a parrot!’ You certainly have to watch out for the Macaws though; these beautifully coloured blue and yellow birds have a beak that is going to hurt. When daring their pen to clean up seed or put in food you often have to distract them in order to get the task done. They also, according to Ali,

‘have the sense of humour of a two year old’.  Also  Bubble and Squeak, the two very friendly cockatoos will atempt to undo your bra strap…

On your food rounds you meet a host of different animals. Being right in the centre of the biggest avery you are surrounded by an explosion of sounds, bright colours, swooping birds and plodding tortoises.  It’s such an energetic, vibrant environment that could captivate you for hours. In a different pen, the female alligator, called steve (obviously), rarely moves. In fact many of the volunteers are convinced Percy, the owner of the sanctuary, has bought a fake one; a model that he quickly moves around when no one is looking.

There are four adult cheetahs and two of them are unusually in love. Cheetahs don’t normally stay together as a couple, brothers may stick together, but females often wander on their own or stay and look after their children. However two of the adult cheetahs at the sanctuary seem to break these animal-world rules.  They are  so much in love that when the sanctuary tried to move the

male cheetah into a pen with a different female he refused to mate with her.  Instead he just sits by the fence, longingly looking at his favourite female through the metal divide. Ali explained they needed to seperate the pair, who are Indie’s parents, because the female was having too many litters and her milk was drying up, but when she is fully recovered they will put the 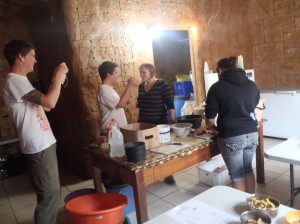 m back in the same pen.

The sanctuary’s volunteers are very much like a family, as soon as you enter you are introduced to the group’s favourite card game and bombarded by questions about your travels. But smokers beware, Percy is often tempted to water gun anyone holding a cigarette, yes smokers you will be soaked.

I’m currently in Port Elizabeth waiting to be picked up by the people from the big five game reserve. Four in the morning fully clothed pool jumping is possibly not advised, however I’ve learnt to make friends with all hostel receptionists and bar staff so such actions can be smoothed over.  Apparently they’d already marked me out as a ‘pool jumper’…so I could have hardly let them down.  I also met a member of the South African cricket team last night.

And no he was not just pretending to be a professional cricket player, the South Africans I was with got pretty excited as soon as he walked in the bar…and I’ve wikipediaed him…Being small and blonde I am often the target of such practical jokes, but not this time. Finally I have to mention the tan…oh my I am going to be a bronze GODDESS in two weeks if the sun carries on like this. Goodbye white, pasty Jenny, hellooooo slightly beige beach babe!