When heading into the Outback, you envisage tiny remote villages, a lot of farm land and the odd Farm building in the distance – well where I’m headed is exactly that. Now I’m no farm girl, the closest I have come to a working farm is looking after my cat or hand feeding the odd sheep, so I was open minded and yet slightly hesitant about what I would be doing over the coming week on the farm… 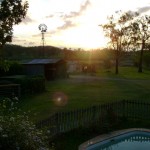 From Rainbow Beach to Gympie and on to Goomeri, the local and closest town to my home and my training Ranch for the next week. There we met the team, including Joanna and Dan the Farm owners and Georgia and Dan the course leaders, who got everyone started with the necessary paperwork and clothing for their working farm life in Australia.

Upon arrival at the farm we were given a quick show around, dumped our bags in the Homestead house and told to put on our working clothes…OK so first minor issue, there I was totally unprepared as everyone stuck on their jeans, shirts and boots – apparently using the motorbikes in flip-flops or Toms was not an option!

Thankfully the guys took pity on me and soon I

had on a shirt that looked like a dress and borrowed pair of old boots. Trying to start the motorbikes was one thing but riding them around the grounds, avoiding trees was another and soon I had smacked my motorbike in to a huge fallen log, sending my bike flying and myself over the top – apparently there is always one. After an adrenalin filled afternoon and hoping that the rest of the week could only get better, we headed back to the house where a roast dinner awaited us.

Day 1, up at 7am (which is supposedly a late start for farmers), hat on, saddle and reins and before we knew it we were riding through the outback. Having done a bit of riding in the past I was looking forward to getting on the horses, however

I found my little knowledge be completely irrelevant with western horses and a completely new riding experience; some horses had only been ridden 20 times so I was nervous to even cough in-case they jolted off but soon we all settled into our stride and Tom our trainer even had us doing races. Reaching the top of the hills we managed to find phone signal to make a phone call,  I think by that time being in the outback had definitely kicked in. Later that day we had our first snake incident with a ‘brown snake’, (apparently one the most dangerous in Australia) which one of the dogs had bitten, quickly Tom took a spade and a pole and next thing I knew we were holding up the two meter long snake hoping it didn’t miraculously come alive.
Over the week at the farm I learnt to use a chainsaw, drive a tractor, build a fence, brand and tag the calves and on our last day we

headed out for a real taste of outback farming. Jumping on the motorbikes or if like me and hadn’t quite mastered the difference between the accelerator and clutch then you chose a horse and we headed out to muster in the cattle. Having never seen this being done in real life I realised it looks harder than it seems, firstly finding the cows then trying to get them out of the trees was difficult and realising that cows can run pretty fast was scary especially with a jumpy horse. Luckily they had a good sense of direction and had obviously done it before and before we knew it we had 90 cattle in the pens. Next came the castration, fortunately I did not have to take on the scalpel asjust watching it and seeing the amount of blood was too much for a first time farmer and with the fear of being sick I retreated back with the other more delicate  group members.

At the end of the week all my fellow ranch adventurers had found jobs around the country stretching all the way to Alice Springs in the middle of nowhere; everyone seemed pretty excited to start work and putting the skills we had learnt into practice. My most memorable moments had to be swimming in the lake with and without the horses to cool off; seeing Kristian – one of the boys finally beat Tom at a motorbike chase and watching a wild horse being broken in and trained then ridden for the first time.

In addition to worki

ng the farm, I took on a completely new lifestyle in the country, from waking up and playing with the puppies to watching the sun setting over the hills, there is never a day the same.  Work on the farm and my outback ranch adventure week opened my eyes to new side of Australia away from the popular coastal stretches. I saw the hard work in maintaining the ranch and farmland as well as the relaxing side when everyone messed around in the lakes, drove the big Ute’s about and watching as the boys attempted to ride on and tip over a cow, not something you would usually see in Sydney or on a beach.